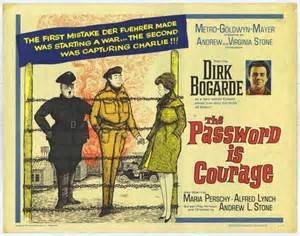 Today is Dirk Bogarde Day at Mondo Movies (well, it’s Saturday, but to be honest it could be any day of the week such is my admiration for this Great British actor.) This was in the period when he was negotiating a different way through his problematic stardom and this is a pretty straightforward if underrated WW2 POW escape story based on the story of Sgt Major Charles Coward.  He spent years planning and making his way out of German captivity. There are some funny moments and the disconcerting sight of a Carry On ensemble actor jars slightly. Writer-director Andrew Stone (working since the 20s) manages the tone well in the face of the problematic scenario. Sometimes we forget that Germans in the main got on with their lives, to some extent, so seeing Bogarde mingling with the hoi polloi on the streets is disconcerting. (Let’s face it, the Germans came out of the war pretty bloody well, didn’t they?!) Onward.