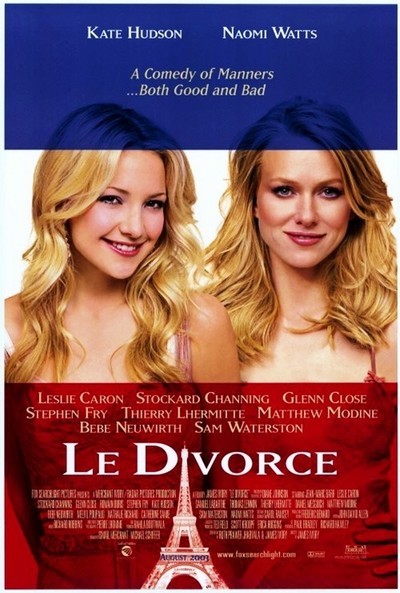 The house of Merchant Ivory had a huge impact on me as a kid – I was desperately impressed with Shakespeare Wallah, Bombay Talkie and Heat and Dust. Ruth Prawer Jhabvala’s screenplays and the settings were elemental. Here she and James Ivory adapt a novel by Diane Johnson, not a woman entirely unfamiliar with the monde du film herself – she did a little screenplay for a certain Monsieur Kubrick called The Shining. So far so unbelievably fabuleux. But her novels about transAtlantic manners Le Divorce and Le Mariage are modern Jamesian comedies which teach us a lot about what goes in France. It’s beautifully handled with a colour palette and a throughline of etiquette that sustains a millefeuille-light story. Unemployed Californian graduate Isabel (Kate Hudson) visits pregnant half-sister Roxanne (Naomi Watts) in Paris just as the latter’s husband walks out on her – literally. Isabel starts working for a writer, apparently a Johnson avatar (Glenn Close) and having an affair with her ex, who also happens to be Roxanne’s uncle by marriage, and a famous politico to boot, played by Thierry l’Hermitte, a one-time heart throb in France. We have digressions on handbags, scarves, sugar, cheese, hunting, greetings, mistresses … and all the time Isabel is making herself over from femme fatale to upholder of women so that she finally resembles the old painting hanging on the apartment wall and which is the subject of a legal and artistic wrangle. When Stockard Channing and Sam Waterston turn up as the girls’ parents, you know you’re in excellent company. There is a brilliantly chosen, unobtrusive score with a variety of artists whom you may or may not know (Jane Birkin, Carla Bruni et al).  This is stylish, subtle and sophisticated. Bon appetit!