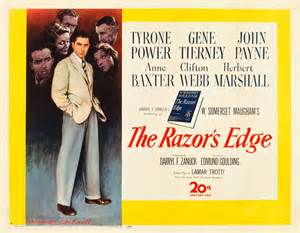 Somerset Maugham’s magnificent novel of the Lost Generation gets the A treatment from Darryl F. Zanuck’s Twentieth-Century Fox. It was a vehicle for the ludicrously beautiful Tyrone Power, newly returned from the War, just like the hero, socialite Larry Darrell, on a quest to find himself after WW1. The obscenely brilliant Lamar Trotti (who died far too young) crafted a faithful screenplay and Maugham himself, who drifts in and out of the story (“as if he leads our lives for us”) is played by Herbert Marshall.  Only Gene Tierney was gorgeous enough to cast opposite Power and she is the woman who can’t let go of him – even after she has. He turns up years later in Paris after his Indian odyssey and she is still in love with him despite husband (John Payne) and children and gets in the way of his self-sacrificing marriage to their childhood friend, the tragic alcoholic Sophie, played in an extraordinarily vivid performance by Anne Baxter (despite the boxy costumes which accentuate her disproportionate frame). Uncle Elliott, the social climber, is played by the wonderfully epicene Clifton Webb (he’ll always be Waldo Lydecker to me). It is meticulously directed by the overwhelmingly gifted British actor/writer/director Edmund Goulding who would be reunited with Power the following year for the simply astonishing Nightmare Alley. Those were the days. The material was so potent that writer/director John Byrum did a version in 1984 starring Bill Murray and Theresa Russell, but that’s another story.