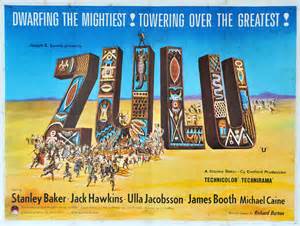 This is the film that really introduced Michael Caine to the world. He’s the posh officer whose advice Stanley Baker refuses to heed and the senseless Battle of Rorke’s Drift of 1879 takes place between a depleted British Army unit and 4,000 Zulus. Patrick Magee as the overworked medic gets the most telling line – “Damn all you butchers!” as the wounded pile up beside the bodies. Great, intense epic filmmaking, written by John Prebble and director Cy Endfield, adapted from Prebble’s article. Co-produced by the wonderful Baker. Superb cinematography by Stephen Dade, music by John Barry and narration by Richard Burton. Shot in Super Technirama 70.