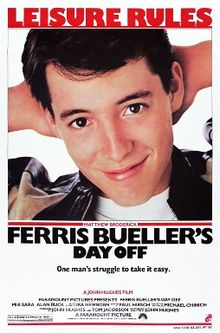 Bueller? Bueller? The singing in the shower. The singing on the street! The Ferrari going off the edge … The escape from the restaurant. The art gallery. The chase across the back yards. Charlie Sheen hitting on Jeanie in the police station. The scam with the headmaster! The dog ON the headmaster! The school secretary. The disguises. Faking it! The music! The clothes! It’s set over a day, it was written in a week, shot in three months. It has the clean lines of a Tintin strip courtesy of Hughes’ regular cinematographer Tak Fujimoto and design by John W. Corso. Matthew Broderick as the charming one became a star and we all fell in love with this. Broderick and Alan Ruck were real-life best friends and hey, John Hughes was a genius. Aw heck, it’s just a forever movie. Bueller? Bueller?!