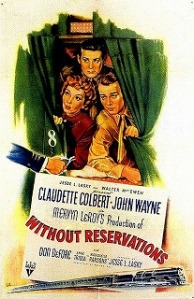 Claudette Colbert is the famous author of a political allegory that’s been snapped up by Hollywood. On the train while travelling to the studios she meets a Marine (John Wayne) who could play her hero now that Cary Grant’s dropped out but she conceals her identity – Wayne doesn’t like the book – and an array of misadventures ensue. He’s accompanied by best bud Don DeFore (two DeFore movies in one day, howzaboutthat?!) and they are both charmed by the cute little lady whose antics are clearly inspired by two of her previous train and road movies – The Palm Beach Story and It Happened One Night. They are both classic comedies. This is not, even if it is based on a novel written by two smart women, Jane Allen and Mae Livingston: I am presuming the acclaimed novel Colbert has written is Ayn Rand-lite.  They detour to New Mexico where their host advises her to write based on her experiences before chasing them off his property with a shotgun. In the end they take 80 minutes to get to LA by which time I was gnawing at my own arm in frustration. Louella Parsons issues some of her radio gossip and Cary Grant turns up but it’s not enough to save this, even with Colbert being her customarily lustrous self. Interestingly, however, given that this is a romantic comedy, it ends on a shot of a bed, with Colbert and Wayne being joyously reunited just offscreen … daring!