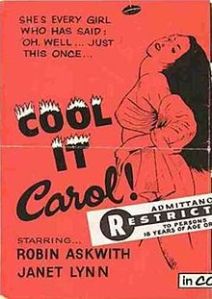 Janet Lynn is Carol Thatcher (!), the smalltown girl who’s bored and wants to go to London for fun and a modelling career. She convinces Robin Askwith playing Joe the trainee butcher to join her and deflowers him on the train journey. They quickly run out of money and she thinks it’d be a lark to pose for nude photos and when they have to wait to see if they’ll sell, he pimps her out so they can eat. Lynn maintains her upbeat approach to the world of seed even when old men masturbate over the pair of them having sex for a porn film. She wants to draw the line at having sex with a sheikh but now that Joe’s managing her she has to go through that and more because there’s so much money involved … they fetch up with a lorra lorra money but they’re not happy. Lynn is quite the delight and Askwith is good as the naif. From the pen of Murray Smith, this Pete Walker outing is a typically cautionary tale about prostitution – but it doesn’t stop him shooting all those couplings and breasts, eh? The Seventies. Another time, when you really did find stories in the News of the World and just change the names. Allegedly.