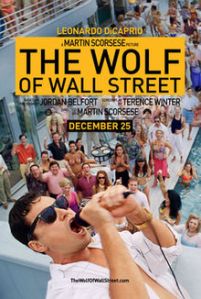 How innocent do JR’s Who’s That Knocking At My Door fantasies appear in the welter of sexual spectacle on display here. Stockbroker Jordan Belfort’s memoir of his outrageous drug and sex-fuelled exploits on Wall Street at his firm Stratton Oakmont are pure outrage:  nothing succeeds like excess. It’s in your face from the first moment in Terence Winter’s adaptation for director Martin Scorsese, his last film to date. Leonardo DiCaprio’s fifth collaboration with the NYC filmmaker is nothing if not exact:  he shepherded the project into production over a prolonged period and his performance is extraordinary – and he’s matched by Jonah Hill as Donnie the totally crazed acolyte who has married his own cousin and publicly masturbates upon first sight of Jordan’s new crush, Margot Robbie, whom he marries after cheating with her on his wife. The scene when Jordan and Donnie ingest out of date super ludes has to be seen to be believed:  DiCaprio’s voiceover explaining his trip straight to cerebral palsy is just … beyond description. Trouble is, FBI agent Kyle Chandler and the Securities Commission are onto Jordan and people start getting careless in their sales methods and there’s so much money they’re running out of hiding places. The viewer is effectively subjected to an onslaught of nudity, sex, drug-addled mania and hilarity in this horrific inversion of Horatio Alger. If your eyes don’t explode your brain will. (Remember all the little people whose money they took…) Nothing less than brilliant.