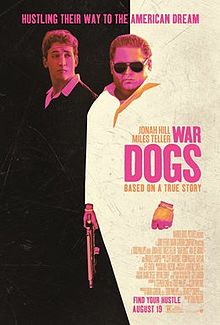 Comic auteur Todd (Hangover) Phillips doing a serious analysis of arms dealing in the Iraq conflict? Well … not so much. Arms and the Dudes was a Rolling Stone story about two supposedly clueless twentysomethings out of Miami who vacuumed up the crumbs of the US Army’s defence contracts and made a mint until their attempts to cover up ammo from China (literally – by rebagging them) caught them out when their Albanian contractor called the State Dept after their infighting left him without a payroll. Miles Teller is David, a college dropout with a pregnant girlfriend under pressure to earn more money than his private massages yield. Jonah Hill is his old friend and aspiring wheeler-dealer Efraim who needs help exploiting a gap in the defence market by the expedient of watching an Army provisions website. The story is set up like a comedy but with Scarface references (it’s the poster over Efraim’s desk and his drug intake is Montana-prodigious). There is a very funny sequence when they have to go to the Triangle of Death in Iraq to get their first delivery to its intended destination. This is expertly done with the amount of threat, humour and action you know Phillips delivers well. When they want to land a life-changing contract they head to Vegas (where else would arms dealers meet?) and encounter a very familiar figure (I was surprised, not having read any spoiler reviews) who can give them everything they need but he’s on a watchlist and they have to go to Albania to carry it through. The story is fatally wounded by David’s narration which is done as a serious commentary instead of a self-deprecating series of enlightening witticisms. (Teller was presumably cast to appeal to the youth market. Bad move. He’s about as funny as a funeral and his naif act is not a patch on Ray Liotta in Goodfellas.) His girlfriend is a wuss. The baby sentimentalises things too. So although this is a satisfying exercise in many ways we needed more fun, less moralising: when Efraim fires a machinegun in Albania like a gangster, that’s the real deal. And with this much money around and Efraim involved, you know there’s a stitch up on the cards. Jonah Hill is really good.  If this had had the courage of its convictions and weaponised the facts, it might have been great.