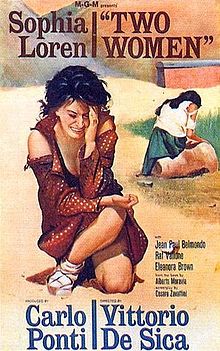 Sophia Loren was sent a copy of Alberto Moravia’s novel La ciociara about a mother and daughter forced to hit the road for the mountains of central Italy during World War 2 when Rome is attacked by the Allies and the people they encounter and the choices they are forced to make – and what a group of Moroccan men do to them. Loren read it with a view to playing the teenaged daughter with Anna Magnani as her mother but negotiations with the older woman broke down and Loren, at twenty-five, was to play the mother of a fourteen year old girl. (In the film, she is twelve). Such a young woman relied entirely on the direction of her father figure, director Vittorio De Sica, of whom there are those who say she was his masterpiece. Cesare Zavattini adapted the novel with uncredited contributions from De Sica, who listened to Loren about her own family’s wartime experiences:  while fictional it was indeed based on the mass rape of Italian women by Moroccans from the French Expeditionary Corps, an event known as ‘la Marochinnate’ which took place after the Battle of Monte Cassino.  Jean-Paul Belmondo is the charming activist Michele for whom both mother and daughter fall and who is frogmarched to guide escaping Nazi soldiers through the mountains. It was an intense shoot and Loren recalled what her mother went through during WW2 for many scenes. The gang rape in a church of mother and daughter is vivid and moving and De Sica manages it discreetly but effectively. The tragedy of the effect of the rape on their relationship is clarified in the following sequences. Loren was nominated for an Academy Award but didn’t go to Los Angeles for the ceremony, positive she wouldn’t win. Former co-star Cary Grant called to say she had won and she was deluged with congratulations. It was an extraordinary achievement for a young Italian woman and truly marked her coming of age as an international actress. Eleanora Brown, who plays Loren’s daughter Rosetta, was exactly twelve when the film was shot and she made a handful of films before retiring in 1968. She is a startling performer and it’s a shame her career was so short-lived.