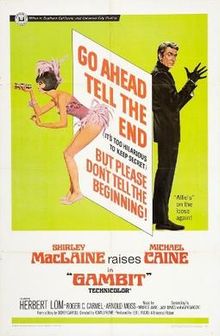 Michael Caine’s a Cockney burglar who spots the uncanny likeness between Eurasian showgirl Shirley MacLaine and the late lamented young wife of the world’s wealthiest man, Herbert Lom and sees the potential for robbing a priceless work of art. There’s roleplaying, misunderstandings and the fact that MacLaine has ideas of her own. This is a lot of fun but the story twists are telegraphed too quickly if you’re looking hard enough although it’s well constructed:  we see everything played out in the first 20 minutes then Caine reveals that’s how it should go.  Then it all happens – for real. Which is when it gets complicated. The principal cast play it  beautifully, however, timing the comedy with expert precision and the heist when it happens is pretty good. Adapted from Sidney Carroll’s novel by Jack Davies and Alvin Sargent and directed by Ronald Neame. The gleaming cinematography is by Clifford Stine and Maurice Jarre did the score.