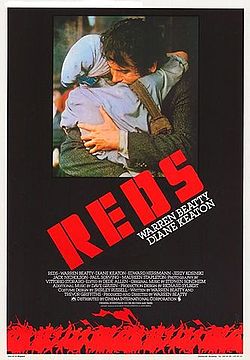 Warren Beatty is emerging from his shell with another film this Fall (about Howard Hughes) and it’s been a long time coming. He takes his time (over some things, apparently) and it’s always worth waiting for. This epic film about American radical John Reed took a very long time to make – weather conditions were part of the problem, the script was the other. The spine of the story is his romance with a married woman, Louise Bryant (Diane Keaton), who was a dilettante journalist who left her husband to shack up with him,  and their love triangle with poet (later playwright) Eugene O’Neill (Jack Nicholson). He travels to Russia to document the Revolution and returns a Bolshevik. In any dimensional epic a romance is inscribed as the secondary line of narrative but this is really dominated by the personal story because it’s principally about characters who are diverted by ideas and ideologies – free love is just about escaping responsibility, not assuming it. Discovering too late in the day that Soviet rule is corrupt and corrosive and murderous (with Jerzy Kosinski a suitably intimidating Zinoviev), our heroes are incapable of being saved from their own foolishness. Notable for its cinematography (Vittorio Storaro who got an Oscar) and a score by Stephen Sondehim and Dave Grusin, this includes ‘witness’ interviews with personalities as diverse as Henry Miller and Rebecca West and is perhaps the kind of film Godard would have made if anyone had been silly enough to give him Beatty’s budget. Maureen Stapleton won a Best Supporting Actress Oscar for her no-nonsense Emma Goldman and Beatty won for Best Director.