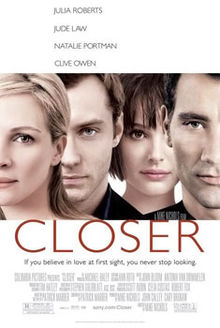 Patrick Marber is a hell of a writer. I loved his play Dealer’s Choice so when I heard his next play Closer was opening in London I grabbed a flight:  I just couldn’t wait. And it was – is – superb. Evidently I wasn’t the only fan because Mike Nichols directed this adaptation a half dozen or so years later. This is a modern and classic story of the roundelay of relationships:  NYC stripper Alice (Natalie Portman) is literally knocked sideways when she meets obituarist Dan (Jude Law) on a London street. A year later he’s written a book about her and flirts with the American photographer Anna (Julia Roberts)hired to do the jacket. It’s another coup de foudre. He messes in an online chatroom and unwittingly introduces Anna to dermatologist Larry (Clive Owen, who played Dan on the stage) whom she marries. A year after her exhibition (titled Strangers) opens, all their tangled relationships fall asunder as infidelity after infidelity is revealed… A play on Cosi fan tutte (with a cunningly integrated score by Suzana Peric), this is a stunningly intelligent treatment about love and sex:  and it messes with your head because it treats of the subject as it really is. Identity. Roleplay. Images. Pretending to be the person the other person thinks they want. (Unutterably exhausting, as Gone Girl informed us).  The closing reveal is a right shocker to people not paying attention. Alice is at the centre of everything:  that is clear when you rewind it mentally. The soundtrack is distinguished by Damien Rice’s extraordinary song The Blower’s Daughter. London looks great thanks to Stephen Goldblatt, it’s edited superbly and all the performances are excellent. I wish Marber would write more.