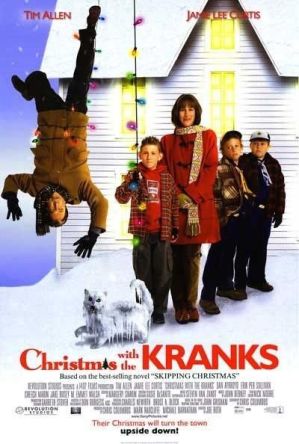 Tis the season to be jolly. Or not, if you’re Luther Krank (Tim Allen), your daughter Blairy (Julie Gonzalo) is in the Peace Corps in Peru for the forseeable future and you spent a shedload on this meaningless tripe last year – so why bother? This year he’s skipping Christmas, as the original title of this John Grisham adaptation goes. Time for a Caribbean cruise! Wife Nora (Jamie Lee Curtis) isn’t so sure and the pressure is on as the suburban neighbours gang up against them in their unsurprising display of conformist mob rule and the kids prank call them and organise baying crowds at their front door which is unadorned by lights or decor. There are some good jokes about Botox and religion. The satire turns soft when Blairy calls to say she’s arriving the next night for the traditional Christmas Eve celebrations – with her Peruvian boyfriend who’s asked her to marry him. There ensues a series of eleventh hour pratfalls to save the celebration, including borrowing a tree, finding tinned ham (uh – yum?!) and pretending that everything is going ahead as normal. The neighbours – even the curmudgeonly thug M. Emmet Walsh – help the Kranks pull off a regular Christmas because, you know, that’s how lynch mobs work. Live by their rules or die. And Luther gives away the cruise. Yes I live in a place just like this. As a vegetarian and humanist I can assure you no pigs will suffer chez moi and I would not have a glass snowman on my roof if my life were to depend upon it. Written by Chris Columbus and directed by Joe Roth. The countdown begins.