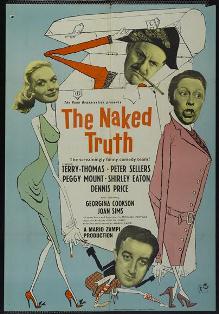 Aka Your Past Is Showing.The wonderfully smooth Nigel Dennis (Dennis Price) is a London tabloid magazine publisher who makes a fortune blackmailing his subjects to stop horrible stories about them going to press. After a couple of his targets expire – naturally and by suicide, he goes after a new lot of slebs:  TV star and fake Scot, Sonny McGregor (Peter Sellers), Lord Henry Mayley (Terry-Thomas), novelist Flora Ransom (Peggy Mount) and model Melissa Wright (Shirley Eaton). After some very funny schemes taken independently to tackle this noxious man (who drives a very neat car), they team up to try and take him down rather than pay him off. Sellers gives his first truly comic feature performance, with an array of impersonations which would be a preview of later work, including an almost Behan-like trip to a Dublin pub looking for gelignite, as you do. There’s a very amusing sendup of Agatha Christie by Joan Hurley. Written by Michael Pertwee and directed by Mario Zampi, who gets an amusing shoutout by Terry-Thomas prior to the ill-fated conclusion. A product of its time but gives you a clue as to why some of those cleaner-than-thou names appear with alarming regularity at the Daily Mail‘s annual yacht party at Cannes, hmm???