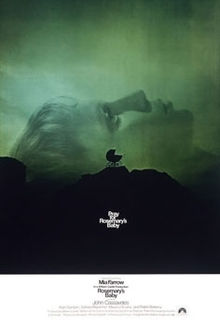 This is not a dream, this is really happening! Such was writer/director Roman Polanski’s respect for Ira Levin’s novel that when he wanted to make one minor alteration to the modern classic he contacted the author to ask his permission. The novel is a satire about modernity but such was its impact the story’s surface elements about devil worshippers in NYC’s Dakota Building off Central Park retain a blackly comic power, aided enormously by the staging, photographing and performances. Mia Farrow is the limpid Rosemary Woodhouse, whose new husband Guy (John Cassavetes) is an ambitious actor quick to sacrifice his beloved and sell his soul for fame. (Sometimes I think Cassavetes’ casting is the film’s one mistake – anyone could mistake him for the devil with that face.) Ruth Gordon is raucously hilarious as the overly nosy neighbour with a penchant for chocolate mouse (with a distinctly chalky undertaste) while Sidney Blackmer is her persuasive husband whose obscure origins are uncovered by Rosemary’s friend. Farrow’s horrifying deterioration throughout her pregnancy is complemented by that famous Vidal Sassoon cut she got on set. The daylight in the brilliantly designed apartment;  the framing and movement through space;  the tone;  all these are components of Polanski’s inimitable filmmaking, and, together with William A. Fraker’s cinematography and the score by Christopher Komeda you have a classic of Gothic paranoia and a masterpiece of cinema. Every time I hear Farrow singing along to the title I quake and yet I keep watching, and I peer around that door, just like Polanski wants me to do… Terrifying and unforgettable.