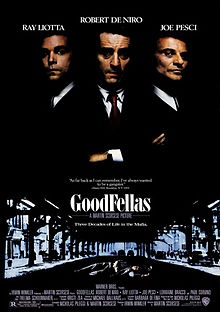 As far back as I can remember I always wanted to be a gangster. Martin Scorsese’s astonishing portrait of Sicilian-Irish Henry Hill’s 25 year rise through the ranks of Italian-American hoodlums – and his eventual fall – is re-released this month and it still exerts a visceral thrill. Between Coppola and Scorsese we have a reference book on this topic and so many of the tropes and lingo of this subculture are common parlance thanks to them. Nicholas  Pileggi adapted his book Wiseguy (with Scorsese) and with an exegesis on true crime and punishment, violence,  family, honour and dishonour, cooking, drugs and horrible taste,  it has a panoramic sweep we pretty much take for granted. Not for nothing did some of the cast become mainstays of The Sopranos, which wouldn’t exist without this. However it is not the sociological examination we think it was:  it’s a film of no particular depth or self-knowledge, not if we’re depending on Henry’s voiceover. Instead it’s a stylish compendium of cinematic vocabulary, with flourishes influenced by everyone from Anger to Visconti, boasting a particularly nice tribute to The Great Train Robbery in the closing moments. And there are a lot of great, queasy moments here, with gore to spare:  Joe Pesci has the lion’s share as the psychopath Tommy DeVito; Paul Sorvino as the main guy, Paulie Cicero;  and Catherine Scorsese has some nice bits as Tommy’s mom, a keen amateur painter; De Niro is good as Jimmy Conway, the other Sicilian-Irish guy who can never be truly Mafia; Lorraine Bracco is superb as the whining Jewish wife who develops a taste for cocaine; and Ray Liotta could never be better than here, even if he’ll never be a made man. A funny and scarifying tour de force of surfaces, textures and moviemaking.