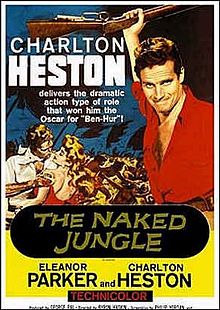 I’ll go a long way to see an ant movie but this is only worth it if you’re feeling in the mood for a masochistic melodrama with a two-mile-wide by twenty-mile-long column of bugs at the tail end. Eleanor Parker is the proxy mail order bride who fetches up on Charlton Heston’s South American cocoa plantation at the turn of the century but he doesn’t much like her and takes agin her when he realises she’s a widow. He hasn’t really been there or done that way out in the Amazon jungle so she has him at something of a disadvantage. Some torrid and rather suggestive arguments lead him to send her back to N’Oleans but their gallop upriver is halted by the insects, he greases up to burn them out and she sleeps through the worst of it. Golly, they sure don’t make them like this any more! Based on a story by Carl Stephenson this was adapted by Ranald MacDougall and blacklistees Ben Maddow and Philip Yordan, directed by Byron Haskin and produced by George Pal. This was released March 3rd 1954 so it’s practically an anniversary screening. Personally I prefer Them! and Phase IV. Oh my heaving bosom!