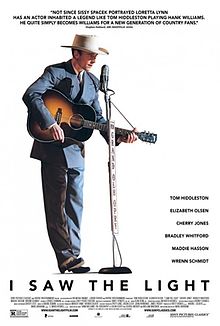 It starts with a marriage in a garage and within the first ten minutes I had switched this off twice. Elizabeth Olsen plays the talentless attention-seeking narcissistic divorced mother Audrey Sheppard, who latches onto Hank Williams (Tom Hiddleston) like a leech and whines and wheedles her way on his radio show alienating his band, his producers and his manager mother Lillie (Cherry Jones). Her vile off-key nasal voice literally drove me to distraction and the OFF button. It may be true to life but boy did it rile me. Sometimes verisimilitude is fine for dialect coaches but not the audience. This manages to boast a sterling performance by Hiddleston in a story which tells you nothing about how this genius’ mind worked. It has no interest in portraying how he got those demons, how his mother drove his father away, how she ran her son’s life, just the external consequences and incomprehensible relationships. A musical biopic with no interest in music? How a man who couldn’t understand notation came to write some of the century’s greatest songs? No context for those significant radio shows? The wider musical landscape? His dealings with his bandmates? The beating Williams took before his strange death in his own car after being treated by a quack for his chronic alcoholism en route to a concert? Nope. That’s all folks. Hiddleston, who sings all the songs himself, and very well, is wasted. What a shame. If you knew nothing about Williams before you will know even less after this. Stick with Your Cheatin’ Heart  (1964) with George Hamilton.  Or prepare to get really irritated indeed. Adapted from the biography by Colin Escott, George Merritt and William MacEwen by writer/director Marc Abraham.