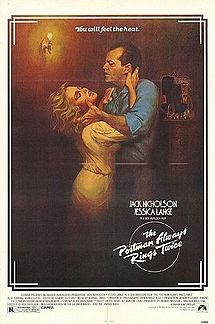 It behoves us on Jack Nicholson’s 80th birthday to celebrate one of his most scorching performances in a totally filthy film. In this remake of the James M. Cain novel, he’s the drifter who fetches up at a diner in the middle of nowhere and becomes embroiled in a sordid romance with the proprietor’s wife (Jessica Lange) who wants him to kill her husband (John Colicos). Director Bob Rafelson was one of those people who played an enormous role in Nicholson’s career. Nicholson wrote the screenplay for Head, the movie about The Monkees, the band Rafelson created for a TV comedy show and then they became almost as big as The Beatles. He produced Easy Rider which gave Nicholson the keys to the kingdom, pretty much. Then he directed him in Five Easy Pieces and The King of Marvin Gardens, where he gave two of his great performances. They would reunite a decade after this for Man Trouble but this adaptation by David Mamet (making his debut as screenwriter) really hit buttons on release – I didn’t see it because I was way too young but I remember the fuss – and the trailers – and the poster!. The kitchen sex scene is one of the most jaw dropping couplings you will ever see this side of a porno and both Nicholson and Lange are simply astonishing in this tale of utter amorality. Some people don’t like the ending, but hey, you can’t always get what you want. This is some birthday celebration, eh?! Golly!