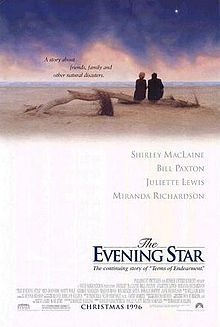 Aka Three Funerals and a Wedding. Just kidding. Well, not exactly. I didn’t love Terms of Endearment and have read neither of these novels about willful selfish Houston widow Aurora Greenway but this messy ragtag followup directed by Robert Harling is not without its charms. Shirley MacLaine is back, aged grandmother and parent to her late daughter’s tearaway grownup children, irritated by longtime housekeeper gimlet-eyed Rose (Marion Ross) and pined after by General Hector (Donald Moffat). Melanie (Juliette Lewis) is living at home but itching to get out and she shacks up with bozo Bruce (Scott Wolf) which of course ends badly – but in LA, which is not so bad, as it turns out. Tommy (George Newbern) is in prison and Teddy (Mackenzie Astin) is married to a tramp and they have a bad-mannered toddler son. Rose plots to get Aurora to therapist Jerry (the late, great Bill Paxton) who has a thing for her – mostly because as she eventually finds out she’s a dead ringer for his Vegas showgirl mom, which doesn’t stop him from sleeping with Aurora’s rival Patsy (Miranda Richardson) which has a great conclusion in an inflight catfight.  The relationship with Paxton is funny and lifts the whole show with MacLaine getting some choice lines especially when she finally meets his mother! There’s a lot of life, love and thwarted passion as Aurora seeks out the great love of her life – and eventually finds it in the arms of her disastrously unaccomplished family while some of those closest to her die. There is a distinct shift of tone when Garret Breedlove (Jack Nicholson) pays a visit in the last quarter hour but the big performances make this, with MacLaine really making it work. You might be surprised to learn that it’s Cary Grant’s daughter Jennifer who is wooed by Newbern. This was Ben Johnson’s last film and it’s dedicated to him – he was of course in McMurtry’s The Last Picture Show where he delivered a performance of incredible subtlety and affect:  not bad for a stuntman. There’s more than a hint of Cloris Leachman in Marion Ross’s performance here. Not a bad recommendation in a film which looks at some of life’s different stages and comes out in favour of them all, by and large. Written by McMurtry and Harling.