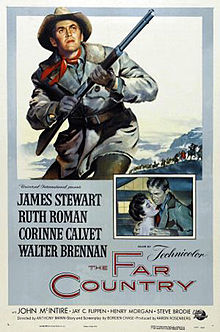 I don’t need other people. I don’t need help. I can take care of myself. Cowboy Jeff Webster (James Stewart) is bringing cattle from Wyoming to the Yukon but the corrupt sheriff in Skagway (John McIntire) steals the herd. Jeff joins forces with the saloon keeper (Ruth Roman) from a neighbouring town but they’re up against someone so tough he kills Jeff’s sidekick (Walter Brennan) and Jeff finally swears revenge for reasons other than his own. Great 50s western that has a political undertow – the journey from individual to collective responsibility. Somehow, director Anthony Mann’s construction and use of painted backdrops combine to undermine the film’s radical message while Stewart (in their fourth collaboration) adds another hue of psychopathy to his character palette. With Corinne Calvet as the young woman who must compete with Roman for Stewart’s affections, this is pretty fantastic entertainment and it looks wonderful (they knew colour then). Written by Borden Chase.