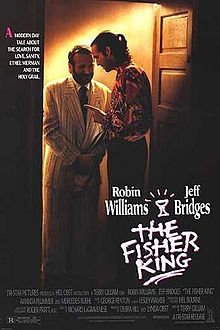 Obnoxious NYC shock jock Jack Lucas (Jeff Bridges) is doling out advice as per and looking forward to a part in a TV sitcom when the news mentions his name – a man was inspired by his rant against yuppies to go on a shooting spree in a restaurant and then killed himself. Jack spirals into a suicidal depression and we find him three years later working in the video store owned by his girlfriend (a fiery Mercedes Ruehl) and about to kill himself when some youthful vigilantes decide to do some street cleaning – he’s rescued by Parry (Robin Williams), a Grail obsessive and homeless loner whose wife was killed in the restaurant massacre. How their lives intertwine and they both chase the objects of their affection (and each other’s obsession) while battling mental illness is the backbone of this comedy-drama-fantasy that is told in the usual robust and arresting style of Terry Gilliam, who was directing a screenplay by Richard LaGravenese. There are iconic images here – the Red Knight appearing to Parry as his hallucinations kick in, and the chase through Central Park;  the extraordinary Grand Central Station waltzing scene in which Parry meets the weird Lydia (Amanda Plummer);  Jack and Parry watching the stars. Gilliam’s own obsessions are all over this despite his not writing it, with references to the Grail (obv) and Don Quixote.  It’s all wrapped into four distinctive performances which embody oddball characters in search of a role for life in a very conventional time, with emotions riding high while personal circumstances contrive to drag them to the very pit of their being. There are some outstanding performances in small roles by Tom Waits, Michael Jeter and Kathy Najimy in a film that proves that dreams do come true.