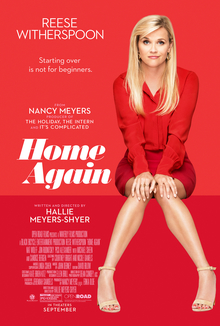 You’re telling me you have live-in childcare, tech support AND sex?! Alice Kinney (Reese Witherspoon) decamps back to LA with her two young daughters when she separates from her music manager husband Austen (Michael Sheen) in NYC.  On the night of her 40th birthday she goes partying with her best girlfriends Dolly Wells (of TV’s Dot and Em) and Jen Kirkman and is hit on by twentysomething Harry (Pico Alexander) who with his brother Teddy (Nat Wolff) and friend George (Jon Rudnitsky) have made a hit short film and are new in town to try to turn it into a feature after getting interest from the WCA talent agency (cue funny meeting). The guys wind up back at hers, Harry throws up while about to do the deed with Alice and next morning George realises her father was the great auteur director John Kinney when he stumbles into a room filled with scripts, posters, camera and – ta-da! – Oscar. And then whaddya know, the late great one’s wife and muse Lillian Stewart (Candice Bergen) walks into the house and invites the would-be filmmakers to live in the guesthouse. Call it philanthropy – she’s feeling kind since she outlived the man who impregnated a younger woman and had a second family – this might be a riff on reality a la Nancy Meyers since it’s her daughter Hallie’s romcom debut.   It’s a peculiar setup in many ways – but the kids love the guys, Alice is having a hard time doing business as an interior decorator with super bitch Zoey Bell (Lake Bell) and this odd domestic situation is not unpleasant. The compulsion to return those nuisance long-distance calls to NYC subside.  Harry isn’t aware that sensitive George fancies Alice too and has taken a side job as a rewrite man, Teddy is auditioning for other roles so he’s now left with the heavy lifting of raising finance among the Hollywood set led by horror director Justin Miller (Reid Scott). When Alice is finally ready to introduce Harry to her friends as her date it clashes with a money meeting and he stands her up, causing a real rupture. Then her not-quite-ex decides to find out what’s really going on on the west coast … Light and funny, this isn’t quite as sharp and zesty as Meyers’ best work (Meyers produced) and there are too many montages set to music as a substitute for character development and dialogue and not remotely enough the type of complications that you’d expect from such a plot. Wells and Kirkman are two fine comic actresses in their own right but they don’t get the full Greek chorus role they deserve and the subplot with Bell (from It’s Complicated) is underdeveloped. Lola Flanery is terrific as the older of the two kids with serious anxiety problems but a talent for writing which George encourages.  Reese is always good value and she’s fine in a somewhat underwritten part which never really lets her rip other than getting drunk and spouting some home truths; while as her young lover Pico Alexander is serious eye candy and they really spark on screen. You’ll have seen him in A Most Violent Year and Indignation. You’ll certainly see him again. Mild, likeable entertainment. Written and directed by Hallie Meyers-Shyer.