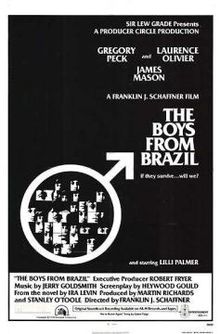 Will I be plagued till my dying day by that infernal Jew? Keen young Nazi hunter Barry Kohler (Steve Guttenberg) contacts the renowned Ezra Lieberman (Laurence Olivier) from South America with the startling news that Nazi war criminals are gathering in Paraguay under the aegis of Dr Josef Mengele (Gregory Peck). As he phones him a recording of a meeting detailing a strange plan he is killed and Mengele realises someone knows something they shouldn’t…. In Vienna, Lieberman opens a packet of photos Barry sent him and tries to make sense of what he’s heard – why must 94 sixty-five year old male civil servants in several different countries be killed by a certain date? After speaking to Nazi guard Frieda Maloney (Uta Hagen) in prison he finds out that several male babies were adopted in the Sixties by women who were 23 years younger than their husbands. After speaking with biologist Professor Bruckner (Bruno Ganz) he discovers that cloning is indeed possible and not necessarily from living donors:  Mengele has bred mini-Hitlers and is having them raised in conditions akin to those in which his glorious leader lived (his father was a civil servant who died before the boy was 15). Lieberman must stop the plot to rekindle the Fourth Reich.,, Ira Levin’s speculative fiction is probably closer to happening now than it was in the Seventies – since which time IVF, cloning and three-parent babies are a mere thought away from what Mengele was doing in his horrifying twins experiments in Auschwitz. So this is a lot less like science fiction than it is science fact. It plugs into the real-life work of Simon Wiesenthal (with Olivier perhaps atoning for his sins in Marathon Man!) when real-life Nazis were still relatively young and of course a huge number of high profile SS men were known to be living freely in sympathetic countries like Brazil and Argentina (never mind running Austria and Germany). It also uses the Lebensborn project as a basis for what is now entirely feasible – apparently. James Mason plays Eduard Seibert, the man who comes to rain on Mengele’s crazy rainforest parade but not before Mengele makes his way to Lancaster Pennsylvania to murder Wheelock (John Dehner) the father of the fourth cloned Hitler (Jeremy Black) a child who is as obnoxious and snotty as his copies in London and elsewhere but has a crucially murderous nature which Lieberman discovers after the boy sets the family’s Dobermans on Mengele. There is a fight to the death – but whose?  This is literally sensational and for connoisseurs of Nazi villains (in cinema) it’s bizarre to see the great liberal actor Peck have a go at Walter Gotell whom he thinks is betraying his plan for world domination. Didn’t they meet in The Guns of Navarone?! Bizarre also to see Bruno Ganz pontificating about clones when his own resemblance to Hitler meant he would play him years later in Downfall. Most bizarre is the fact that Mengele was still alive (for at least another year, possibly longer) when this was released. And for all we know all those Germans in South America (and Europe) have already got their fortysomething men waiting in the wings. Adapted by Heywood Gould and directed by Franklin Schaffner, this had 25 minutes cut for theatrical release in Germany. Poor things! When will everybody stop talking about the Third Reich already?! In the words of the great Dr Henry Jones Jr., Nazis, I hate these guys.