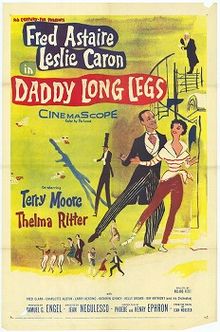 When an irresistible force such as me meets an immovable object like you something’s got to give. American playboy millionaire Jervis Pendleton (Fred Astaire) finds himself on state business in France in a broken down car and happens upon an orphanage where eighteen-year old waif Julie (Leslie Caron) is instructing the younger children. She never meets him but he pays for her tuition at a ladies’ college in Massachusetts on condition that she writes him a letter once a month – which he then doesn’t read for two years until his secretary (Thelma Ritter) insists. Then they meet up because she’s rooming (by his arrangement) with his niece. And, she falls for him without realising that he is ‘John Smith’… Gene Kelly’s influence is all over Fifties musicals – the French connection and the Broadway Melody sequence from Singin’ in the Rain play large parts in this story adapted from Jean Webster’s classic young adult novel of 1912 which already got a handful of previous adaptations, including one for Mary Pickford and another for Shirley Temple (Curly Top). Henry and Phoebe Ephron (Nora’s folks) create a long-ish but diverting vehicle for Astaire and Caron who are both entirely delightful in a situation that could be kind of creepy were it not for the fact that the unseemliness of a relationship is something addressed early on. In fact, the unsuitability of such an old man romancing a young woman is part of the drama. There are some wonderful dance sequences as you’d expect and Jervis’ obsession with music is one of the most attractive things about the story – the early scene where he bounces drum sticks off the walls is really something. This outstays its welcome by at least one fantasy sequence (with Caron aping Cyd Charisse) but overall it’s a beautiful production as you’d expect from that underrated director Jean Negulesco and it totally oozes charm.