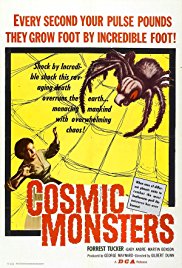 Now let me get this straight – this fiercesome contraption of yours went on working even when you switched off the current?! In the deepest English countryside Dr Laird (Alex Mango) and his team are playing around with the electro-magnetic field and the insects in the surrounding fields are getting big as you like because the energy has to come from somewhere. Gaby Andre (Michele Dupont) is a computer scientist who tries to help out following an accident that injures a lab assistant. When hipster alien Smith (Martin Benson) arrives to warn them to stop playing around with things they don’t understand it’s already too late the and the monster bugs are already on the rampage and don’t even talk about the hole they’ve torn in the iononasphere and people are becoming murderous because those cosmic rays are just wild … With far more fiction than science and less money than sense this cheap Brit monster movie has its moments – mostly when Forrest Tucker as expert Gil Graham smokes while wearing a tasty tweed jacket or the penultimate scenes of insect ravaging. Fun but even at 72 minutes this wears out its welcome pretty darn quick. Watch out for Dandy Nichols and this was Wyndham Goldie’s last film. Paul Ryder and Joe Ambor adapted Rene Ray’s novel and it was directed by Gilbert Gunn while the music from Robert Sharples’ theremin fills in the missing action. MM #1500