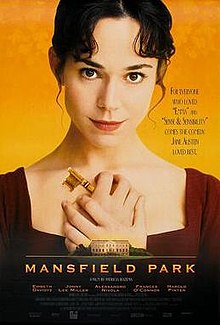 It could have all turned out differently I suppose. But it didn’t. Fanny Price (Frances O’Connor) is born into a poor family with far too many children so she is sent away to live with wealthy uncle Sir Thomas (Harold Pinter), his wife Aunt Norris (Lindsay Duncan) and their four children, where she’ll be brought up for a proper introduction to society. She is treated unfavorably by her relatives, except for her cousin Edmund (Jonny Lee Miller), whom she grows fond of. However her life is thrown into disarray with the arrival of worldly Mary Crawford (Embeth Davidtz) and her brother Henry (Alessandro Nivola). The path of true love never runs smoothly and then there are matters of money. Matches are made and Fanny rejects Henry which sends everyone into a spin and certain romantic fancies turn to actual sex … Well what a palaver – a Jane Austen adaptation that puts sex and politics and money front and centre in the most obvious way. Patricia (I’ve Heard the Mermaids Singing) Rozema’s adaptation plays with the form and breaks the fourth wall and even introduces some very out-there drawings which take Uncle Harold Pinter down a moral peg or three:  he’s made his money in slavery and his son Tom’s return from the West Indies with a terrible illness makes him produce some very realistic impressions of his father’s predilections and the depredations of the slave trade. Austen was the hottest screenwriter in the world in the 1990s (not that she knew a thing about it) and survives even this quite postmodern dip into adaptation by the Canadian filmmaker with some delightful performances, particularly by O’Connor who is given lines from Austen’s own private correspondence in her addresses to camera. But sex? In Austen? Tut tut! Charming, in its own perversely witty fashion.