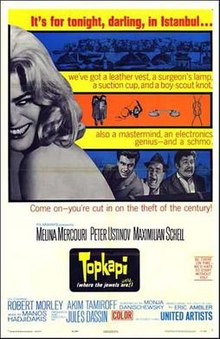 I’ve just had a great idea – something I’ve been looking for a long time… a very long time. Beautiful thief Elizabeth Lipp (Melina Mercouri) and her ex-lover, Swiss criminal genius Walter Harper (Maximilian Schell) put together a plan to steal an emerald-encrusted dagger from Istanbul’s Topkapi Palace with the assistance of larger than life Heath Robinson-type mechanical genius Cedric Page (Robert Morley). As part of their amateur acrobatic crew, they hire small-time con-man Anglo-Egyptian Arthur Simpson (Peter Ustinov) as their driver and fall guy. When the Turkish secret police capture Simpson at the border with a dodgy passport, they persuade him to spy on the gang, mistakenly believing that they’re Communist agents plotting an assassination… French-American director Jules Dassin had already perfected the heist movie with Rififi but everything here is played for laughs even if the scenes with the dubiously tranny charms of his wife Mercouri as the jewel-obsessed magpie are a little more on the forced side and overlong. The pitch is different from the Eric Ambler source novel The Light of Day where Simpson’s voice prevails but the heist itself has been enormously influential, viz. Mission:  Impossible and it was one of the top Sixties crime capers. Gilles Segal is terrific as the mute human fly whose super abilities charge the theft and Akim Tamiroff amusing as the cook. At this distance it all looks a little fake, rather like the team itself – and the recording parrot! Ustinov is very good as the stool pigeon whose intelligence notes to the police need decoding. At the end it seems this is all about a squawking bird. Dassin himself appears as the proprietor of the travelling show intended to transport the dagger across the Turkish border at the conclusion and there are some diversionary oily homoerotic wrestling scenes in an arena which should appeal to the Putinesque. Written by Monja Danischewsky.