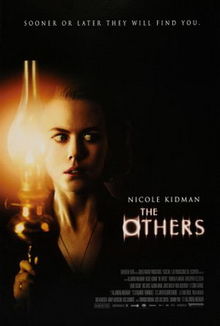 Mummy you’re letting the light in. Grace (Nicole Kidman) is the devoutly religious mother of Anne (Alakina Mann) and Nicholas (James Bentley). She moves her family to the Channel Islands in 1945. She awaits word on her husband who’s gone missing in WW2 while protecting the children from a rare photosensitivity disease that causes the sun to harm them. Curtains shroud the windows throughout the huge house.  Three new servants arrive, stating that they are very familiar with the place as they worked there years before: Bertha Mills (Fionnula Flanagan), Edmund Tuttle (Eric Sykes) and mute girl Lydia (Elaine Cassidy).  When Anne claims she sees ghosts, Grace initially thinks that the servants are playing tricks but chilling events and visions make her believe something supernatural has occurred and Bertha warns of intruders returning … Owing something of its origins to James’ The Turn of the Screw (which was previously directly adapted as the brilliant The Innocents) this original work by Spanish writer/director Alejandro Amenabar was undoubtedly inspired by the success of The Sixth Sense, another example of visual and narrative sleight of hand but nonetheless has its own particular brand of the uncanny. Unless you’re looking for particular breadcrumbs to follow you don’t see them until you work backwards after the twist ending which is carefully built:  this is a masterclass in control. From the Gothic concept, the empty rooms, the lack of food, the nature of the interactions, the fog encasing the mansion, the graveyard, the clues are there, but Grace is wilfully ignoring them until an unexpected intervention that includes a boy called Victor. Kidman’s performance really holds us in the suspension of disbelief that the story requires – tearful, gutsy, protective, guilty, scared, she plays a gamut of emotions while being terrified in this spooky house where she locks every single door to keep her children safe.  This is a very satisfying thriller with there being no question of feeling conned because the mood is perfectly sustained … No one can make us leave this house.