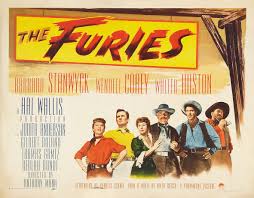 I have no stomach for the way you live. It’s the 1870s. Widower T.C. Jeffords (Walter Huston) rules his sprawling New Mexico ranch with an iron fist, a born-again Napoleon who pays with his own currency, TC’s. But his authority doesn’t extend to his strong-willed daughter, Vance (Barbara Stanwyck), who both hates and loves her father with equal ferocity. He abandoned her mother for an inter-racial affair and she died at The Furies, her bedroom a mausoleum left precisely as she left it with Vance fiercely guarding it. Tensions rise when Vance falls for bad boy saloon owner Rip Darrow (Wendell Corey), whom T.C. buys off. But the family conflict turns violent when T.C. decides to marry Flo Burnett (Judith Anderson) and evict Vance’s childhood friend Juan Herrera (Gilbert Roland) from his land… Charles Schnee adapted Niven Busch’s novel and Anthony Mann does quite an exquisite job of staging the action, with his customary mountainous settings providing an objective correlative for a literally furious woman to take revenge. The interiors are no less impressive with the Gothic trappings enhancing the Freudian subtext with both Oedipus and Electra active in the arena of gender identification. There is a mythical quality to this classic narrative and the visuals reinforce a sense of homoerotic voyeurism in a film which constantly veers toward the psychosexual. Stanwyck is magnificent in one of the key roles of her career and the first of her seven western parts in the 1950s which laid the groundwork for her Big Valley matriarch a decade later. There is a domestic scene of horrifying violence that is for the record books. Rivalry was rarely so vicious. Notable for being Walter Huston’s final film performance.  It was shot by Victor Milner with uncredited work done by Lee Garmes and Franz Waxman provides the aggressively tragic score. I write about Stanwyck’s Fifties Westerns  in Steers, Queers and Pioneers, which you can find here:  http://offscreen.com/view/stanwyck-part-1/.