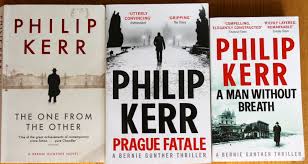 On Friday morning last when I ordered my copy of the latest Bernie Gunther novel, Greeks Bearing Gifts, I wasn’t to know that the author Philip Kerr had just died. I first encountered Kerr at a literary festival 20 years ago when his action thriller Gridiron had hit the shelves and it seemed as though his particular brand of writing was coming good. He was a witty interviewee and highly entertaining about the world of books and the media in general. In fact the much-trumpeted films of this and other novels never materialised and Kerr came back to his Berlin police detective, Gunther, and amid his other series, including children’s fantasies and soccer thrillers, he created one of the best fictional characters you could possibly imagine. Against the backdrop of Nazi Germany, World War Two, and the immediate post-war era, Gunther plods through the evil that men do with the laconic wit and toughness that distinguished Philip Marlowe, remaking the overlooked literary thriller into a positively Greene-ian affair all over again. Kerr  spoke with the same kind of mordant wit about cinematic development hell and meetings with important stars like Cruise and De Niro that peppers all his writing. His insights into character detail no doubt contributed to his former career as a gossip columnist for the London Evening Standard, lawyer, academic and advertising copywriter. I am beyond sad at this dreadful early death for a writer whose every word I savoured. May he rest in peace.