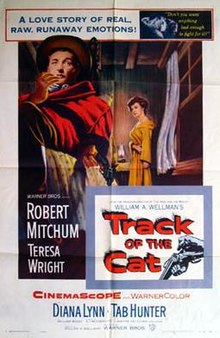 Got to keep drunk to forget I’m married to a clothes pin.  It’s the 1890s. In a snowbound homestead in Arizona, the Bridges family lives in contentious squalor. Brothers Curt (Robert Mitchum) and Harold (Tab Hunter) fight over the attentions of their beautiful neighbor, Gwen (Diana Lynn), while the boys’ boozing father (Philip Tonge) suffers under the abuse of their religiously minded mother (Beulah Bondi) who keeps spinster daughter Grace (Teresa Wright) under wraps. The family dysfunction only intensifies when a panther kills Curt’s timid brother, Arthur (William Hopper), and Curt sets out to slay the animal… There are traces of film noir leaving their track across this western, with its heightened stylised drama, vicious male-female antagonism and intense visuals, all complemented by contrasting performing styles. A.I. Bezzerides adapted Walter Van Tilburg Clark’s novel.  It’s directed by William Wellman, whose pet project this was, wanting to make a black and white film in colour and choosing some extremely interesting setups in collaboration with cinematographer William Clothier. It’s good to see Wright and Mitchum years after Pursued. Because it was produced by John Wayne’s company and didn’t do especially well it was taken out of distribution and remained unseen for many years due to his son’s refusal to have it put on DVD. Since his death his widow has made sure some previously lost films are now available. This is one of them.