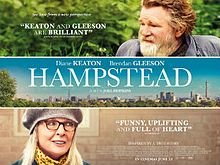 What am I, your cause of the month now? Couldn’t get anywhere with global warming, no?An American widow Emily (Diane Keaton) living in the London suburb of Hampstead and an Irish man Donald (Brendan Gleeson) who lives on the Heath in an illegally erected shack form an unlikely alliance against unscrupulous property developers in the neighbourhood  as they both confront the fallout from their respective romantic entanglements … Diane Keaton has done rather well in work about ageing, particularly in the films of Nancy Meyers. Her ditzy carapace shields a core of steel and her charm is very winning, used correctly. Here she’s just doing it somewhere else – London – and she has a grown up son (James Norton) who’s relocating abroad and she’s got a mountain of debts left by her philandering husband.  Using a pair of binoculars she finds while trawling the attic to find anything she might sell to make ends meet, she spots a man being attacked on the heath. He’s the guy she spotted swimming in the pond. Their meet cute happens at Karl Marx’s grave which is a nice trope for the class and money basis of the unlikely narrative which is in all other matters pretty superficial. While her neighbour Fiona (Lesley Manville) tries to set her up with creepy ukulele-playing accountant James (Jason Watkins) who has designs on her, her campaign to save Donald from an eviction order pits her against Fiona’s property developer husband. The tone is mostly light but Donald’s character is given some heavy lines and the bear-like Gleeson does the drama here which lends this an unevenness that is inappropriate to something that otherwise might have played like a screwball comedy. Somehow he and Keaton cancel each other out instead of making a great couple. They each have great lines but the reactions are not right because they’re mostly in differing scenes. Keaton ‘becomes’ Keaton – she spots a beret in a window and eventually her drabness is transformed into a figure we know on- and offscreen as her character gains in confidence.  She now has a cause beyond her own immediate concerns about the taxman, but her occasional shrillness can’t compensate for what feels sometimes like an underwritten script by Robert Festinger:  she only gets angry at her husband’s grave and we learn at the film’s conclusion it appears Fiona likely knew about the mistress and didn’t tell Emily. Norton’s cursory appearances seem like a last minute addition and do nothing to characterise her predicament which was devised as a fictional device to complement the real story of Hampstead Heath squatter Harry Hallowes. Phil Davis and Simon Callow are terrific in the courtroom scene but this lacks the chemistry between the leads that might have pulled it up beyond its bogus plot contrivances:  even the ending has a very obvious metaphor about navigating your path in life! These fish out of water are destined to swim away from each other, methinks. Directed by Joel Hopkins.