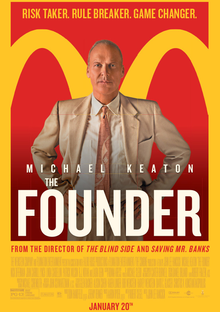 It’s the name. That glorious name, McDonald’s. It could be, anything you want it to be… it’s limitless, it’s wide open… it sounds, uh… it sounds like… it sounds like America. In 1954 struggling Illinois salesman Ray Kroc (Michael Keaton) beefs up his pitch by listening to recordings of self-help books to help him on the road selling milkshake makers to drive-in restaurant proprietors. Then he meets Mac (John Carroll Lynch) and Dick McDonald (Nick Offerman), who are running a very speedy burger operation in 1950s Southern California. Kroc is knocked out by the brothers’ hyperefficient system of making the food and sees franchise potential. With the help of a financial expert Harry J. Sonneborn (B.J. Novak) who directs him to look at the property side of the business nationwide, Kroc leverages his position to pull the company from the brothers and create a multi-billion dollar empire… This tale of venality and daylight robbery is shot in presumably ironic glossy light by the estimable John Schwartzman, crowning a dazzling performance by Keaton who is really on top form here.  His phonecalls to the brothers are the underpinning of the narrative structure and how he splits them from their joint decision-making process is a masterclass. It operates like a thriller, showing Kroc go down by mortgaging the home he shares with his unhappy hangdog wife Ethel (Laura Dern) and then rising to the top by deceiving the brothers horribly – Mac is susceptible to his sales patter, Dick regrets the day they bought his milkshake machine – and, as we suspect he will, marrying franchise operator Joan Smith (Linda Cardellini) who is as grasping as himself:  when they look in each other’s eyes they see dollar signs (they duet on Pennies From Heaven in front of her husband, played by Patrick Wilson). Then they conquered the world with their disgusting fake food and counted their money in Beverly Hills. How depressing. Greed is not good. Produced by Jeremy Renner, written by Robert Siegel, directed by John Lee Hancock. To be filed under True Crime.