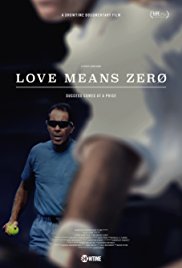 Nick loves the buildup. When things crash or don’t go the way he wants, Nick moves on.  A startling insight into famed – and infamous – tennis coach Nick Bollettieri, whose Florida tennis academy is associated mostly with Andre Agassi, who refused to have anything to do with this film. Interviewed on camera and frequently referring to himself in the third person, Bollettieri created his persona out of necessity, primarily financial, when he needed money for some of his eight wives and families and already in his forties. Intense, volatile, passionate and driven, he managed what seems to have been a mix of juvenile detention centre and luxury hotel, with his favoured students living in the nice bit, the other kids in cramped dorms and doing menial work to earn their keep. It became a kind of feeder for the tennis tour and he did everything to encourage students to attend. Some of them appear in staggeringly revealing interviews. Agassi was part of a Vegas contingent and Jim Courier was a contemporary they despised who worked harder and they eventually faced each other in the 1989 French Open where Bollettieri sided with Agassi which just made Courier determined to win. At the break for rain Bollettieri was doing a TV interview instead of helping his charge. When Courier got the victory, he split with his coach.  The hurt he experienced when Bollettieri was cheering Agassi and staying silent on his own points is clear. When Agassi won at Wimbledon in 1992, Bollettieri split with him after years of using him to gain publicity. Agassi found out in USA Today. He had asked Bollettieri never to coach his rivals but when Boris Becker approached Bollettieri he took him on and Becker faced Agassi at Wimbledon in the 1995 semi-finals and beat him. Bollettieri is remarkably unconscious of his behaviour on camera and claims to remember very little. However Kathy Horvath, a teen prodigy whom he sidelined in favour of pretty Carling Bassett (of the brewing dynasty), remains bitter to this day, while Bassett acknowledges it and suffered herself when her egomaniac father took over from Bollettieri:  she got an eating disorder, which she admits on camera.  Her father died in 1986 and her career disappeared.  She’s been yesterday’s news for a long time and I last read about her after she got pregnant by another player while still a teenager and a story ran that she was cutting coupons for groceries. She believes if she had been allowed to stick with Bollettieri she would have been a great player. Becker maintains that Bollettieri is a life coach whose chosen communication vehicle is tennis:  Nick Bollettieri never won a game of tennis in his life. Courier made his peace with the man years ago. He sold the academy to IMG sports agency and became incredibly wealthy, not that he shared it with his co-workers as they make clear yet they claim they’d do it all over given half a chance. This is a fascinating piece of work, rather like its subject and a very timely screening mid-Wimbledon with wonderful footage and some truly shocking stories of what he inflicted on kids rich and poor alike. Directed by Jason Kohn.