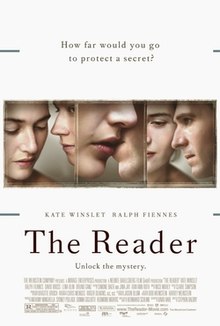 Go to your literature, go to the theatre if you want catharsis. Don’t go to the camps. Germany, 1958.  Fifteen-year old Michael Berg (David Kross) meets thirtysomething tram conductor Hanna Schmitz (Kate Winslet) when he falls ill with scarlet fever and she comes to his aid. Months later he visits her to thank her and she seduces him. They meet regularly and their relationship is passionate. She insists that he read books to her during their meetings. Reading first. Sex afterwards.  When Hanna abruptly moves away without informing him, Michael is heartbroken. Years later, while studying law at Heidelberg University, he is shocked to discover that Hanna is on trial for a brutal Nazi war crime when he is sent to observe a case at court. She admits to something that will incriminate her and ensure life imprisonment rather than say she is actually illiterate. She became a prison guard to hide her problem. What would you have done? Michael withholds the crucial information that could minimise her sentence. Ten years later he (Ralph Fiennes) is divorced and unhappy. His daughter lives with his ex and he has nothing much to do with his family.  He records cassettes of himself reading books and sends them to Hanna in prison.  She teaches herself to read using his recordings alongside books from the prison library. Then Michael is phoned by the prison as he is Hanna’s only contact to be told she is due to be released and needs to re-enter society … Bernhard Schlink’s semi-autobiographical novel Der Vorleser was watercooler stuff, the book you had to read a decade and a half ago. In an era suffused with simplistic youth-oriented dystopic nonsense and wizardry it was water in the desert, a book that had historic relevance and contemporary resonance in a society still gripped by the Nazis who were and are still living, still unrepentant. When Michael asks Hanna what she learned in her prison term she states bluntly, I learned to read. Winslet may have received the acting honours but the role is narrow, her character’s intelligence limited, her grasp of anything finite beyond a certain native shrewdness. Everything is transactional, even degeneracy. It is Fiennes who has to retain and expose the devastating effect their relationship has had on his life, as a son, a husband and father. He is also the adult lawyer living with the knowledge that his generation has been mainly unmarked by the failure of the German state.  Yet somehow his sexual adventure has created an incriminating situation for him akin to guilt.  Kross is equally good as the boy initiated into the wonders of sex with a woman who gets him to repeat the reading ritual that Jews were forced to perform for her at Auschwitz. The irony that they have both introduced each other to vastly differing worlds ricochets through his adult life. Her shame concerns illiteracy, not complicity in murder:  this is the crux of the narrative. She will not dwell in the past. It is a metaphor too far for some perhaps but it makes sense when you consider the ease with which Germany rebuilt itself with former Nazis running everything, an arrangement blessed by the former Allies, a fact erased from most people’s consciousness. That is why I believe so many critics hated this film:  we are all complicit in Germany’s overwhelming role in Europe today,  in permitting the Nazis to continue in another guise:  we are therefore no better than the Germans ourselves.  Linking this concept to an erotic coming of age story is daring and reminiscent of The Night Porter, another divisive work.  Michael did not go to his father’s funeral, his mother says.  We infer that his father’s role in World War Two was beyond the pale, at least for him. Things remain unspoken. This is a complex, emotionally powerful film with a problematic resolution that seeks to assuage several varieties of guilt without actually excusing anyone, understanding the accommodations necessitated by the quotidian. Adapted with acuity by David Hare, directed by Stephen Daldry and produced by Anthony Minghella and Sydney Pollack who both died during production. There’s an interesting score by Nico Muhly and Bruno Ganz’s performance as the law professor with Lena Olin as a Jewish camp survivor (and her mother) rounding out the impressive cast in a troubling and carefully constructed moral tale.