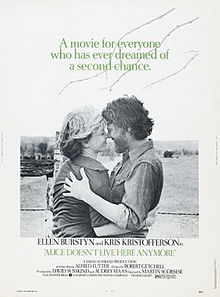 I could lay under you, eat fried chicken and do a crossword puzzle at the same time; that’s how much you bother me. When her abusive husband dies, single mom Alice (Ellen Burstyn) and her wiseass 12-year old son, Tommy (Alfred Lutter) leave their small New Mexico town of Socorro for California, where Alice hopes to make it as a singer despite not being particularly good.  She dreams of returning to Monterey where she grew up. Money problems force them to settle in Tucson, Arizona instead, where Alice takes a job as waitress in a small diner owned by Mel (Vic Tayback). She intends to stay there long enough to make the money needed to head back out on the road, but her plans change when she begins to fall for David, a rancher (Kris Kristofferson). Tommy befriends Audrey (Jodie Foster), a slightly older girl who encourages bad behaviour and whose own mother is a prostitute.  When David quarrels with Tommy, Alice leaves him until they come crawling back to one another …  Martin Scorsese (handpicked by Burstyn) entered mainstream Hollywood with this genre piece, a woman’s picture written by Robert Getchell (who died 2017) that announces itself with a parodic rose-tinted dream sequence and titles on crushed satin, 1930s-style. But it’s a woman’s picture with an underlying and sometimes overt threat of violence, despite its sunsplashed settings. So we travel with Alice as she makes her way through life as an adult who has it tough but still dreams of being what she wanted as a small child, reality notwithstanding, lurching from one bad relationship to another in the American Southwest. As this 35-year old woman’s life is unpicked, sometimes with humour and sometimes with pain, the crushing of her ambitions is hard to watch even as she maintains a certain optimism necessary just to make it through her day.  Making the decision to settle for less is something she works on every day. Burstyn’s performance is nuanced and moving, but she is matched by Lutter as her bratty son (who seems more like an argumentative friend) and Foster as his troublesome friend, and particularly by Ladd as Flo the fellow waitress with whom Alice shares home truths. Burstyn won the Academy Award, Ladd was nominated, and Getchell lost out in the Best Screenplay category to Robert Towne for Chinatown. Scorsese was nominated for the Palme d’Or at Cannes. That’s how good a year this was for movies.