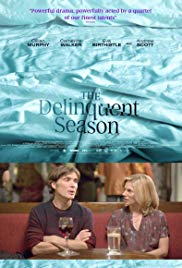 Our happiness is so fragile and we are all just hanging on by the skin of our teeth. Danielle (Eva Birthistle) meets up with an old schoolfriend Yvonne (Catherine Walker) and they introduce each other’s husbands over a terrible meal when Yvonne’s other half Chris (TV’s Sherlock psycho Andrew Scott) loses it and Danielle’s husband Jim (Cillian Murphy) begs off ever having anything more to do with them. But when Yvonne shows up at their home after Chris has kicked her he falls for her seduction even after Chris tells him he’s dying of cancer and he hasn’t told anyone else. Jim and Yvonne carry on their illicit affair in hotel rooms and on the dunes at the local beach until Danielle asks Jim for the code to his phone and Yvonne arrives at their house again – but this time to reveal the news that Chris is dying … Playwright and screenwriter Mark O’Rowe’s directing debut from his own script aspires to be a morality tale about the middle classes (or smug marrieds) but it is a long way from the quality of Patrick Marber’s Closer or even Polanski’s adaptation of Yasmine Reza’s Carnage. Partly that’s to do with the lack of cleverness in what is essentially a chamber work (or even a chess game) with the pieces assembling and realigning as the relationships shift, mostly unwittingly;  partly that’s to do with the utterly inexcusable overuse of the F word which might be suitable for a local Irish audience but even the casually tolerant tourist would find excessive:  using it in the middle of a word for instance  ‘unF’ing believable’ is inventive and amusing, using it continuously without any kind of rationale for over-emphasis is lazy and offputting. Partly it’s beyond how these people sound (Walker’s line readings and sibilant and consonant enunciation grate like F***, as she herself might say); and how they look, in unattractive surroundings which are in a dull palette, shot and staged unimaginatively.  These people are not remotely interesting. They’re not even nasty enough to make us gasp. There is no sign here that anyone involved is acquainted with the language of film. Not a single member of the cast has sufficient screen technique to overcome the crass limitations of the script. The sex scene between Murphy and Walker is horribly unflattering:  where were the cosmeceuticals?! Or the lights? (Or the sheets). The fight at the funeral dinner is poorly staged even if it’s an effective dramatic device with the passive aggressive Chris finally showing his mettle in public; and the twist in the relationships, when Murphy takes up with a rude working class waitress, is literally unbelievable:  O’Rowe is no Somerset Maugham. The circular structure is a good move (once again, it works for Marber) but the sheer impoverishment of the vision, the inelegant language and the lack of anything to say kills this stone dead. This staggering banality wouldn’t last more than a night on your local Town Hall stage.