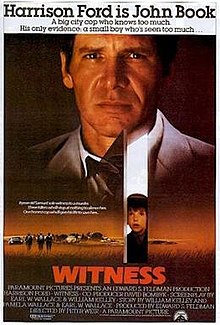 We’re all happy that you’re going to live, John Book.  After witnessing a brutal murder, young Amish boy Samuel (Lukas Haas) and his mother Rachel (Kelly McGillis) seek protection from police officer John Book (Harrison Ford). When Book uncovers evidence of police corruption involving narcotics lieutenant James McFee (Danny Glover), Book must take Rachel and Samuel, and flee to the Amish countryside where Rachel grew up. There, immersed in Amish culture and tradition, Book and Rachel begin a cautious romance while he tries to fit in and the enemy closes in …  I just don’t like the idea of my son spending all this time with a man who carries a gun and goes around whacking people! Great films tend to create a narrative fulcrum based on juxtaposition and opposites:  here we have simplicity and purity versus corruption and violence, delicacy versus roughness, city versus country, child versus man. Written by Pamela Wallace and Earl Wallace and William Kelley, this was director Peter Weir’s entree to the American mainstream after a decade of extraordinary work in his native Australia. It also marked Harrison Ford’s acceptance into the acting world proper after a decade as action superstar courtesy of George Lucas and Steven Spielberg. His relationships with Rachel and Samuel and his willingness to look silly – that sheepish grin when he’s in Amish clothing! – signalled a new level of sensitive and complex personification.  With a barn-building sequence out of the Dutch masters,  a romantic dance scene that is one of the sexiest ever made, and a conclusion that ratchets like a vise-like grip closing on the protagonists with an astonishing climax in a grain silo out of silent horror cinema, this is made by a master craftsman at his most cinematic and beautiful. Maurice Jarre’s score is legendary. An American classic. No. Try not. Do or do not