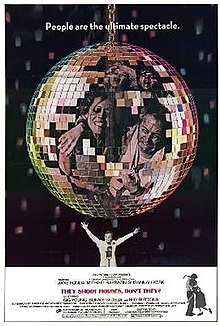 Don’t forget your poor old mother. Yowza yowza yowza! In the midst of the Great Depression in 1932 wannabe film director Robert Syverton (Michael Sarrazin) encounters manipulative MC Rocky (Gig Young) when he wanders into a dance marathon on the Santa Monica Pier.  Rocky enlists contestants offering a $1,500 cash prize. Among them are a failed actress Gloria (Jane Fonda) whom he induces Robert to partner; a middle-aged sailor Harry Kline (Red Buttons); delusional blonde Alice (Susannah York); impoverished farm worker James (Bruce Dern) and his pregnant wife Ruby (Bonnie Bedelia). Days turn into weeks as the competition drags on and people either drop out or die. Rocky will do anything for publicity and initiates a series of gruelling derbies and nerves fray as exhaustion sets in … That soap’s a little hard. James Poe and Robert E. Thompson’s adaptation of the 1935 Horace McCoy novel plugs straight into its melodramatic core – a musical drama about economic despair. And the air of desperation hanging over these lost souls is like a fug, admirably sustained by director Sydney Pollack. Fonda is superb in a complex performance as the brittle cynic whose psychology is gradually broken while all around her succumb to the physical pressure. Her fear drives the story. How extraordinary to think that Charlie Chaplin had acquired the rights to the property eighteen years earlier, intending to cast his son Sydney opposite Marilyn Monroe in the roles played by Sarrazin and Fonda. It fell apart when Chaplin was refused re-entry to the US on foot of his political sympathies. When Fonda was approached by Pollack he asked her what she thought of the material and the character and she writes about it as a turning point in her career:  This was the first time in my life as an actor that I was working on a film about larger societal issues, and instead of my professional work feeling peripheral to life, it felt relevant. It also marked the beginning of Sarrazin’s years as a leading man – somehow he fell out of fashion in the late Seventies. He would die in 2011. There are some wonderful contrivances like the flash forwards that certain critics found irritating but it all works to build a mythic aspect. This is a stunning, disturbing indictment of social artifice and possesses a haunting quality, with its title becoming a catchphrase (and inspiring a hit song) and Gig Young’s fraudulent host inducing a kind of existential dread of showbiz ‘characters’. Maybe the whole world is like Central Casting – they got it all rigged before you ever show up