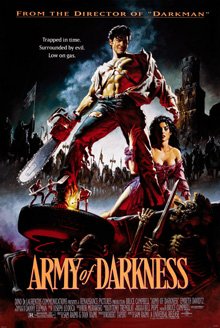 If I get the book, you send me back.  After that, I’m history.  Ash (Bruce Campbell) is transported back to medieval days, where he is captured by the dreaded Lord Arthur (Marcus Gilbert) and enslaved with Duke Henry the Red (Richard Grove) and some of his men. Aided by the deadly chainsaw that has become his only friend, he is recognised by Wiseman (Derek Abercrombie) as the saviour who’s dropped from the sky.  So he is sent on a perilous mission to recover the Necronomicon or Book of the Dead, a powerful tome that gives its owner the power to summon an army of ghouls. Wiseman advises that he must say the words Klaatu Barada Nikto to safely get the book. However, Ash forgets the last word and an army of the dead resurrects to attack Arthur fortress and recover the Necronomicon. … My name is Ash and I am a slave. Close as I can figure, the year is thirteen hundred A.D and I’m being dragged to my death. It wasn’t always like this, I had a real life, once. A job. The third installment of the parodic Evil Dead series, this can be summed up as a cross between A Connecticut Yankee in King Arthur’s Court and Jason and the Argonauts. Our reluctant hero Campbell is as compulsively watchable as always in a script by director Sam Raimi and his brother, Ivan Raimi.  Aided and abetted by the wondrous Sheila (Embeth Davitz) who is rendered undead Bride of Frankenstein-style following their romantic interlude, he battles live and skeletal alike assisted by his trusty saw, earning his enemy’s respect by killing monsters in a pit and rising to the challenge of this kinetic military onslaught.  Daft and funny, this is agreeable stuff with an ending straight out of Planet of the Apes. As you were.