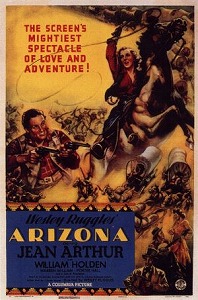 Did you ever see a man’s stomach tore open by a shotgun? Phoebe Titus (Jean Arthur) is the only woman in 1861 Tucson, Arizona and after falling for Peter Muncie (William Holden) who’s passing through, offers him a job in the freight company she’s just set up with Solomon Warner (Paul Harvey) the local storekeeper but he wants to see California and promises to return. Then charming southern dandy Jefferson Carteret (Warren William) shows up as the Civil War breaks out and coerces Phoebe’s main competitor Lazarus Ward (Porter Hall) into joining in with undermining her business while pretending to be her friend. He bribes local Indians to attack her wagon supply and meantime the Confederate troops secure local allegiance but are called away and Tucson is in trouble when Peter shows up with Union soldiers …  Gets on my dander how a doggone war interferes with the plans of people who want to mind their own business. Adapted by Claude Binyon (better known for romcoms and musicals) from the 1939 Clarence Budington Kelland novel, this was shot around the Sonoran Desert and takes a male genre and turns it into a battle of the sexes story with a distinct feminist twist. That makes sense when you have Arthur as the protagonist – with that can-do attitude and the gurgle of a voice, she’s perfectly cast and knew the territory after playing Calamity Jane in DeMille’s The Plainsman. Plus Binyon and director Wesley Ruggles had previously collaborated on a number of films presenting women in a great light, including the great screwball comedy True Confession (starring Carole Lombard) as well as the previous year’s collaboration with Arthur, Too Many Husbands, a version of the Enoch Arden story (by Somerset Maugham) trumped by My Favorite Wife at the box office. The personal touch abounds in this epic, the central asymmetrical romance with Holden (years younger than Arthur, who never looked her real age) matched by the villainy of William.  While we bide our time waiting for the sublime twist ending, played beautifully by Arthur, there’s lots of shoot ’em ups, murders, wartime action and a fantastically shot cattle rush. The film was made in blistering heat which added horribly to the discomfort and budget. Nonetheless it’s a great showcase for Arthur who revels in the situation and the witty lines gifted this pioneering frontier woman. She’s one tough cookie! The music by Victor Young is a series of  inventive orchestrations of and variations on Stephen Foster’s Jeanie With the Light Brown Hair.  If this is what it’s like to be in love I’m glad I’m only going to love once