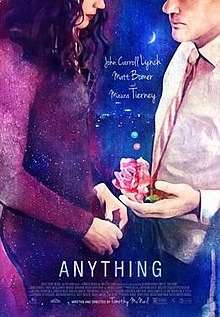 You don’t want to live in Hollywood. Struggling to cope with the death of his wife and following his own suicide attempt, Mississippi widower Early Landry (John Carroll Lynch) moves to Los Angeles to be near his sister Laurette (Maura Tierney) who works in development at Sony and lives in Brentwood with her wheelchair bound husband Larry (Bradley Wayne James)  and teenage son Jack (Tanner Buchanan). A stranger in the city, Early endures the dinner party from hell when a widow (Bonnie McNeil) says she can’t stop thinking about her dead husband. His life is changed forever when he gets a place of his own in Hollywood and grows close to his transgender prostitute neighbour Freda (Matt Bomer) and experiences a different kind of love in a ramshackle building where everyone’s got their own problems … When I first got here I had a pulse. That and a desire to die. Practically an essay in kindness and intersectionality, this very contemporary mood piece has its origins in a 2007 stage play written and directed by Timothy McNeil who does the main duties here. With beautiful impressionistic handheld cinematography by James Laxton (who works a lot with Barry Jenkins) we see downtown LA as Early gets to experience it:  shopping at Ralph’s, eating at Canters, hiking in the hills, stopping at the burger stand. These interludes and montages disguise the fact that most of the action takes place in Early’s new home. His interactions with his neighbours including songwriter Brianna (Margot Bingham) and her junkie boyfriend David (Michah Hauptman) are blunted with alcohol and he finally sees in these marginal people echoes of his own life and its limitations following a happy 26 year-long marriage.  Lynch is nothing if not an unconventional romantic lead – as Brianna says, like Andy Griffith’s sadder brother.  He imbues this supposedly simple man with incredible complexity and warmth. (Let us not forget Lynch is a fine director too, having helmed Harry Dean Stanton’s last film, Lucky). The abortive attempt to introduce Freda at a dinner party with Laurette and family is grindingly difficult and ends in tears:  rather fantastically, everyone behaves just as you’d expect but the writing is so good and lacking in crude stereotypes you’d expect elsewhere. This is all about pain and lack of empathy. Bomer is superb as the beautiful prostitute who cannot believe her feelings for this tightie Southern whitey and she endures the horrors of detoxing when Early decides they’ve got to quit their respective demons.  She’s a mess of feelings and conflicts with all sorts of arresting ideas and lines and a desire to change her life, it’s just that this relationship was definitely not on her agenda. It’s a sweet romantic drama with rough corners about acceptance and making the best of what and who you’ve got. In this small scale but rewarding film we are reminded that love and friendship find a way, no matter what we do to get in the way. In spite of all your love letters and your stars you really fucking hate me