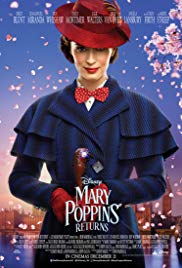 As I live and breathe. Grown up father Michael Banks (Ben Whishaw) and his three children get some help from Mary Poppins (Emily Blunt) when the bank closes in on their home where his sister Jane (Emily Mortimer) helps out following the death of Michael’s wife a year earlier … Cleaning is not a spectator sport. Perhaps it was inevitable that following the successful transposing of the classic film into musical theatre that Disney would go back to the toybox and raid one of their most significant creations, a live-animation hybrid that lingers long in the imagination and the heart. With songs by Scott Wittman and Marc Shaiman and set in ‘The Great Slump’ which we presume is sometime in the Thirties, this is a combination of race against time and treasure hunt, as the shares certificate that will save the family home is in the place least likely to be found – or the most obvious, if you know anything about movies/kites. There is a highly unlikely romance between Jane and Jack the lamplighter (Lin-Manuel Miranda), Mary is rather astringent and inconsistent, the dour interior and visual designs lack the antique spark of the original and there are real longeurs in between the fantasy sequences. Breaking the contract with the audience, there is jeopardy in these, featuring a kidnapping that harkens back to The 101 Dalmatians or The Aristocats. You might recognise Willie the Operatic Whale in ‘The Royal Doulton Music Hall’ but there seems to be a real disconnect with the story and some diversionary tactics – Miranda has a speechifying song part in ‘A Book is Not the Cover’ that could be out of his own Hamilton; Meryl Streep shows up as Mary’s foreign cousin and has an upside down song (‘Turning Turtle’) which has little to do with anything. It’s odd that the true heart of the original only starts to be suggested in the finale, a coda to the action that visually resonates and pops practically perfectly off the screen – at last. Directed as well as he directs everything else by Rob Marshall, who adapted with David Magee and John DeLuca, at least this isn’t a remake and James Corden isn’t in it but Angela Lansbury and Dick Van Dyke are. Everything is possible, even the impossible