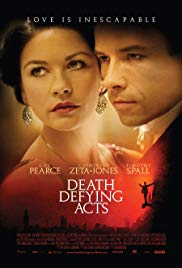 We had a real double act, my mam and me.  It’s 1926. Upon arriving in Edinburgh, Scotland for a series of mind-boggling performances, master illusionist and escapologist Harry Houdini (Guy Pearce) offers an impressive cash reward of $10,000 to any supposed psychic who can accurately tell him his beloved late mother’s exact last words. Gorgeous local swindler Mary McGarvie (Catherine Zeta-Jones) rises to the challenge and together with her streetwise daughter Benji (Saoirse Ronan) leads Houdini on in a dangerous flirtation that blurs the line between reality and paranoia –  but she has reckoned without the machinations of his canny manager Sugarman (Timothy Spall) who knows a con when he sees it but has his own reasons to let this Oedipal obsession play out in the world of spiritualists, fake or not … Nothing in this world’s free. It’s an engaging premise and well staged but this drama of who’s-fooling-who sadly won’t hoodwink the audience. Pearce is hardly Houdini although he’s a charmer whether tied up underwater or on the surface, and Jones’ and Ronan’s lively performances as grifters are marvellous but can’t conceal the dramatic deficit at the centre of the narrative. It looks wonderful and is beautifully staged but never really takes off, the mystery of Houdini’s personality is never convincingly exposed and of course as we know it ends in tragedy. Written by Tony Grisoni and Brian Ward, directed by Gillian Armstrong. I used to be a nice man you know. Do you believe me?