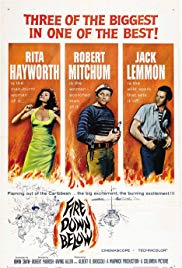 When it runs it’s a good little boat. U.S. expatriates Tony (Jack Lemmon) and Felix (Robert Mitchum) cruise around the ocean and eke out a meager subsistence using their small tramp boat to transport cargo around the Caribbean islands in between drinking sessions. When they take on the job of smuggling illegal-immigrant beauty Irena (Rita Hayworth) to another island (from nowhere to nowhere), they find their friendship torn apart by their mutual romantic feelings toward her and a betrayal occurs. After the authorities are on his tail he takes a job on cargo ship Ulysses but gets trapped below deck following a collision and time is running out  … What a country America is, everything even rebellion. Irwin Shaw’s adaptation of Max Catto’s 1954 novel is a fantastic star vehicle with sparky characters, ripe and eloquent dialogue  – there are real zingers about Americans abroad and the world of men and women. Well, Shaw knew all about all of that good stuff. Some fantastic setpieces include numerous musical sequences (the harmonica theme was written by Lemmon while the title song is performed by Jeri Southern) and a fiery conflagration to bring things to a head. He and Mitchum have a friendship that is curdled by love for the mysterious Hayworth who is as usual much better when she’s required to move rather than stand still and emote. Lemmon is fine as the cuckold but Mitchum and Hayworth have really great scenes together – after dancing in a huge crowd she returns to their table purring at him, That was wonderful. Wasn’t it, he deadpans back to her. There’s a universe of understanding between them. Herbert Lom shows up as the harbour master, Bernard Lee is a doctor, Anthony Newley is a bartender, producer Albert Broccoli makes a cameo as a drug smuggler, there’s a gunfight at sea and best of all there are three stars doing what they do best in their inimical and idiosyncratic style. Fantastically entertaining. Mitchum would not only make his next film in the Caribbean (Heaven Knows Mr Allison) he recorded a calypso album! Directed on location in Trinidad and Tobago by Robert Parrish. I’m so sad that little dogs howl in desperation when they see me