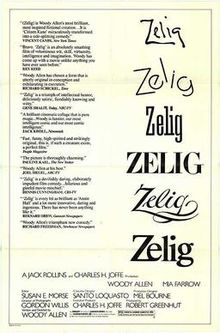 All the themes of our culture were there. In this fictional documentary set during the 1920s and 1930s a non-descript American called Leonard Zelig (Woody Allen) achieves notoriety for his ability to look, act and sound like anyone he meets. He ingratiates himself with everyone from the lower echelons of society to F. Scott Fitzgerald and the Pope becoming famous as The Changing Man. Even Hollywood comes calling and makes a film about him. His chameleon-like skill catches the eye of Eudora Fletcher (Mia Farrow), a psychiatrist who thinks Zelig is in need of serious cognitive analysis as someone who goes to extremes to make himself fit into society. Their relationship moves in a direction that’s not often covered in medical textbooks as she hypnotises him … I’m certain it’s something he picked up from eating Mexican food. A formally and technically brilliant and absolutely hilarious spoof documentary that integrates real and manipulated newsreel footage with faked home movies, a film within a film, period photographs of the leads and interviews with contemporary personalities, real and imagined, from Susan Sontag and Saul Bellow to ‘Eudora Fletcher’ (Ellen Garrison) in the present day. Even Bruno Bettelheim shows up to declare the subject the ultimate conformist. The sequence on the anti-semitism Zelig experiences as a child (his parents sided with the anti-semites, narrator Patrick Horgan informs us mournfully) is laugh out loud funny. Of course it has a payoff – in Nazi Germany. The editing alone is breathtaking, there is not a false moment and the music is superlative, forming a backdrop and a commentary as well as instilling in the audience a realistic feel for the time in which this is set. There are moments where you will not believe your eyes as Allen transforms into everyone he meets – regardless of race, shape or colour. An original and funny mockumentary that’s actually about the world we live in, an extreme response to childhood bullying and what we do to make ourselves fit in and where that could lead. You just told the truth and it sold papers – it never happened before!