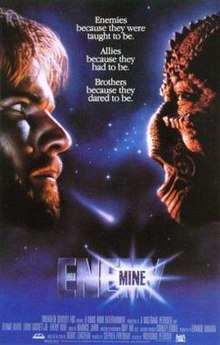 Do you think we really are alone out here? During a late 21st century a war between humans and the reptilian Drac race,Bilateral Terran Alliance (BTA) spaceship pilot Willis E. Davidge (Dennis Quaid) ends up stranded after their dogfight ends up with them both crash landing on alien planet Fyrine IV with enemy soldier Jeriba Shigan (Louis Gossett Jr.). While both Willis and his Drac counterpart can breathe on the planet, the volcanic environment and its creatures are relatively hostile, forcing the two to trust each other and work together to survive. As time goes by, Willis and Jeriba become unlikely friends, though their unique relationship faces considerable challenges over three years and they save each other’s lives. Davidge dreams of spaceships and then sees human miners scavenging on the planet:  they have to avoided because they use Dracs as slaves. Then Jerry, who like all Dracs is asexual, reveals his pregnancy and dies in childbirth after bearing a baby son Zammis (Bumper Robinson) whom Davidge undertakes to raise and return to the Drac world … Don’t you ever get tired of reading that book?  Edward Khmara’s adaptation of Barry B. Longyear’s novella strains between creature feature and sci fi epic but succeeds on its own terms with a message of intrinsic humanity.  It harks back perhaps to the effects-laden production that was director Wolfgang Petersen’s previous outing, The Neverending Story, especially with Gossett’s lizard-like makeup, but the Why Can’t We All Just Get Along theme is well worked out in the inter-species friendship and Quaid is his typically charismatic self. You’d have to have a heart of stone not to find it touching. It looks great and the beautiful score is by Maurice Jarre. That’s why when we walk or when we hunt we always walk in the direction of the rising sun