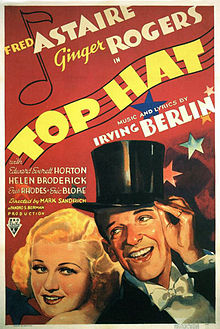 For the women the kiss, for the men the sword! American dancer Jerry Travers (Fred Astaire) comes to London to star in a show produced by Horace Hardwick (Edward Everett Horton). He meets and attempts to impress model Dale Tremont (Ginger Rogers) to win her affection, but she mistakes him for Horace. Jerry pursues her to Venice where she is promoting the work of Jerry’s love rival, fashion designer Alberto Beddini (Erik Rhodes) and visiting her friend Madge (Helen Broderick) who is Horace’s wife … My dear, when you’re as old as I am, you take your men as you find them – if you can find them. With a score by Max Steiner and songs by Irving Berlin, who couldn’t love this arch, witty treatise on love? And there are also all those extra tasty treats for connoisseurs of the period – particularly our favourite, Eric Blore as Bates, Hardwick’s fussy valet; incredible gowns designed by Bernard Newman; and the high Art Deco production design typical of the era’s screwball romances but specifically the Big White Set by Van Nest Polglase constructed for the Astaire/Rogers musicals. It’s probably the best loved of the duo’s ten pairings and with good reason, the combination of song and dance reaching peaks of sheer perfection in this the fourth time they co-starred. In fact, it’s Heaven. Swoonsome, amusing entertainment in the smooth classical style. Written specifically for Astaire and Rogers by Dwight Taylor and Allan Scott, adapted from a stage play, this was RKO’s most profitable film of the decade. Directed by Mark Sandrich. In dealing with a girl or horse, one just lets nature take its course